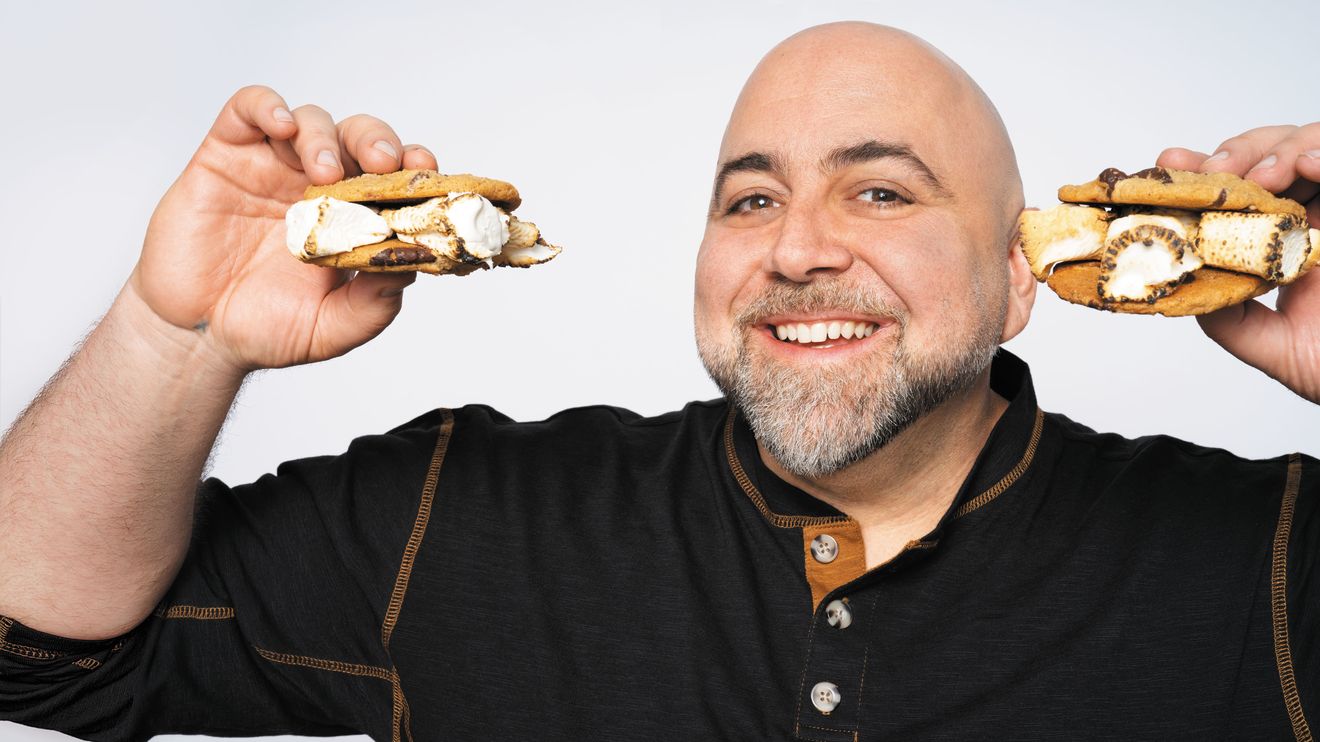 The Ace of Cakes still aims to be a master at his craft. Especially when it comes to his Thanksgiving dessert spread.

We’re talking about Duff Goldman, founder of the Baltimore-based bakery Charm City Cakes, which is known for its over-the-top, intricately designed creations. Goldman and his business rose to fame when “Ace of Cakes,” a television show that chronicled life at the bakery, started airing on the Food Network in 2006.

Goldman, who has baked cakes for occasions ranging from one of President Barack Obama’s inaugurations to a Tony Bennett birthday party, has since gone on to host more shows for the Food Network. And as a judge, he appears on the new season of “Holiday Baking Championship” and also on two holiday specials.

But Goldman has a life outside of the bakery and television studio. Her latest cookbook, “Super Good Cookies for Kids,” was released earlier this month. And he continues to play bass in a rock band—music was an early love of his—in whatever free time he has.

MarketWatch caught up recently with Goldman, who now lives in California with his family, to hear about his Thanksgiving plans and ask him a range of financial and other questions. Here are edited excerpts from the conversation.

MarketWatch: Let’s begin with the most important question you can ask Duff Goldman before Thanksgiving: What do you serve for dessert on the holiday?

Goldman: This year, I’m making two pecan pies and two pumpkin pies. There’s a South African dish called a milk tart. My wife saw a picture (of it), and she was like, “I want that.” So I’m making that. I made chocolate ice cream. I made a Chinese five-spice cardamom of ice cream. I made a vanilla ice cream. I’m making some almond bread, (which are) just little cookies for dunking in coffee. And then I’m also making cornbread and Parker House rolls.

MarketWatch: This is for how many people?

MarketWatch: Do you feel unusual pressure around the holidays? Because obviously people know you as a baking expert.

Goldman: I don’t really feel the pressure. Look, I’m pretty confident in my abilities as a baker so I enjoy the process. I love to bake, and it makes me happy that I know everyone’s going to get some really delicious stuff.

MarketWatch: What’s a basic tip you’d give home bakers to keep in mind for the holidays?

Goldman: One of the best things you can do is try to stagger your work. So, for example, if you’re making a bunch of pies, you can make your pie dough and roll it out two or three days beforehand. Conceivably, you can roll it out a year before, put it in the freezer, and it’s fine until it’s time to bake it. That way, you’re not doing everything on Thanksgiving, right? You get a lot of your work done before the big day.

MarketWatch: You have a new cookbook out for kids. Why do you think it’s important to get our kids in the kitchen?

Goldman: Cooking is really important for kids for lots and lots and lots of different reasons. One is that cooking is a lot of fun. It’s like potions class in Harry Potter. Kids love making stuff and when you can make something and eat it, it’s pretty magical for kids. I think it’s also teaching kids to understand what they’re going to be putting in their bodies and knowing how things are made. What’s in certain things and (what are) things you can eat a lot of and things you shouldn’t eat a lot of. By knowing how to cook, they can really control that.

MarketWatch: How does playing in a rock band influence your baking, and vice versa?

Goldman: It’s funny. When I started Charm City Cakes in 2002, I literally started it so I would have a way to pay the rent in my apartment while I was trying to be in a successful touring rock band. And it’s kind of still true to this day. I’m still waiting for my big record deal to come through. Like all the cooking is just my day job.

MarketWatch: What’s something you hate spending money on?

Goldman: One thing I hate spending money on is the industrial medical complex, the cost of just everything. It is such a backwards system designed to enrich a few people, and really really really hurt everybody else. It’s just got to change, and I don’t know what that (means). I’m a cake decorator, right? I don’t make policy. The profits of these (heathcare) companies are just insanely egregious. Every time I’m paying insurance bills and hospital bills, it really irks me. Me and my family are fortunate that we have the means to pay for healthcare. A lot of people can’t.

MarketWatch: Conversely, what’s something you like to splurge on?

Goldman: So, it’s funny. The thing I really like to splurge on is like tools, like woodworking stuff. I’m a carpenter, and I like making stuff. Like right now, I have this two-year project I’ve been working on for my daughter (a set of hand-painted wooden blocks) and I’m giving it to her for her second birthday. I bought some really nice buffing pads that are a little bit more expensive than they need to be. But that’s the kind of stuff I really like.

MarketWatch: What’s a favorite possession of yours?

Goldman: My 1969 Fender P (Precision) bass. It’s the smoothest bass (guitar) I’ve ever played. And I’m like, “Where have you been all my life?” I love my other basses, but when I started playing this one I was like, “Oh, my God. It’s wonderful.”

Goldman: I’m pretty terrible at personal finance. I have a guy that handles all that for me now because I’m a creative person. I’m good at starting businesses. I’m no good at running them.

MarketWatch: Do you think you’ll ever retire?

Goldman: My wife and I were talking about what I would do if I ever did retire because I need to constantly do things. I build stuff. To install I playmusic. I have so many interests and hobbies. I’d go crazy if I was just sitting around. One of the things we talked about (is that) I love to teach. And if I ever do retire, I think I want to get a job, close to where I live in LA, just teaching high-school culinary classes.

Get Big Tax Breaks for 2022 by Acting Now

Crypto Firm FTX Landed in the Bahamas With a Bang, and Now the Bahamas Is Picking Up the Pieces

What is climate change and global warming? Causes, effects and news.

28 of our readers' favorite products from this year

What is climate change and global warming? Causes, effects and news.