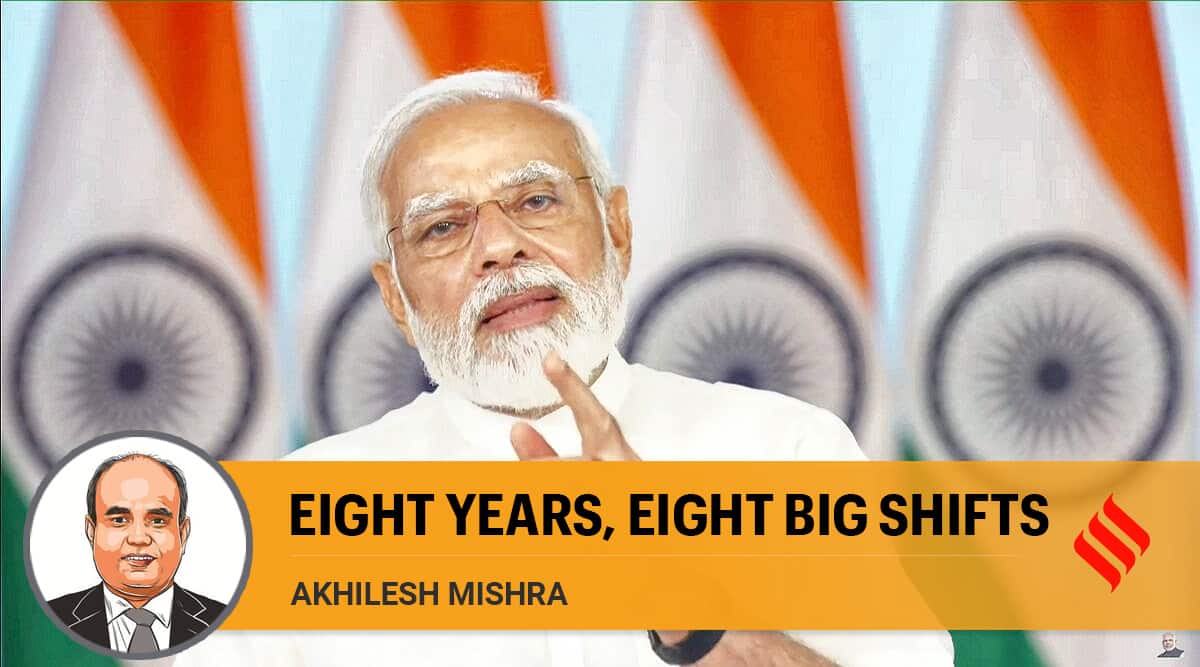 In an essay written in 2012 for Foreign Policy, Daron Acemoglu and James A Robinson identified 10 reasons which they thought explains why countries fail and fall apart. Read a decade later, it offers a stark reminder of the period that we in India were before 2014 and how most of those 10 reasons applied to India as well. Specifically, the part of a “weak central government” and how such governments have calamitous consequences.

On May 30, Prime Minister Narendra Modi completes eight years in office. How do we assess his record? Or to put it differently, what are the changes in these past eight years as a result of a strong central government that Modi leads, which also offer a contrast to the pre-2014 period when we came perilously close to failing and falling?

First, restoring belief in “Constitutional democracy”. Think of the era before 2014 when we had given up on the central government. Violent crowds had become the place for policy formulation and framing of laws and regulations. One of the greatest contributions of Modi has been to consign that phase to the dustbin and restore the confidence of people in elected governments.

Second, imbibing the spirit of “we can do it” in the country as a whole. From 42 unicorns in one year to vaccinating almost a billion people in less than a year to rescuing over 22,000 people from an active war zone, nothing seems beyond the reach of our people if we set our minds on it.

Third, energizing all parts of the country and all sections of the society to contribute to our national cause. There is no more the “tyranny of distance” for the Northeast. It is now an equal contributor in our economic growth. A state like Uttar Pradesh, besmirched in an earlier era as part of the BIMARU group, now sets national models of governance. From sports to technology, and from creative fields to sciences, all sections of society now routinely set new benchmarks.

Fourth, restoring a sense of security in our people. In 2008 alone, 308 Indians were brutally murdered by terrorists across cities in the country. Contrast this with the period between 2016-22 when there have been zero deaths outside Jammu and Kashmir, Punjab and the Northeast. Naxal terror has similarly been neutralised. On the external front, Pakistan has been taught a lesson inside its own territory. And unlike in 2013, when then then defense minister pleaded helplessness against China, New India has shown its resolve both in Doklam and in Ladakh.

Fifth, the creation of a new brand India image that is confident in its assertion of an India First policy. From becoming a founding member of initiatives like the QUAD and the Indo-Pacific Economic Framework (IPEF) to leading the global agenda on climate change, to asserting its own national priorities in the Ukraine war to forging close ties with all countries in West Asia, India of 2022 is qualitatively different and in a better place than it has been at any time since Independence.

Sixth, the creation of a new Indian economic model which is part of the international consensus on free and open democracies but is different from the Western consensus. In the last eight years, Modi has been able to put in place a model that seamlessly fuses free market dynamics with welfare delivery. That this has been done at a billion plus scale and in a country of continental diversity makes it easily replicable. Contrast this with pre-2014 India when the country was part of the “fragile five”.

Seventh, the infusion of self-confidence in our people as a society. We now assert our unique cultural history or our national interest first policy without any preamble or apologia. We no longer get swayed by morality lectures from actors whose actions belie their preaching. From the badminton arena to policy debates in think tanks, from signing trade deals to reclaiming our civilisational sites, we are now confident to just go out and do our thing without looking for approval from any superior certifying authority.

Eighth, and perhaps the most important change in these past eight years has been the change in the mindset of us Indians as a society. As Prime Minister Modi himself put it, the attitude is now of “chalta hai nahin, badal sakta hai”. It is this “badal sakta hai” thinking that permeates the mindset of “how will this not happen” when faced with any seemingly improbable task that PV Sindhu so evocatively describes in her chapter in the recently released book [email protected]:Dreams Meet Delivery,

In a way, what Modi has been able to achieve in these past eight years is what he set out to do in 2014 when he used to talk of targets to be achieved by 2022. We are now in the 75th year of our Independence and as we enter Amrit Kaal and look ahead towards the next 25 years, these eight years of Modi have set the stage to catapult India into the league of select nations that will lead the world in the 21st century.

The writer is CEO, Bluekraft Digital Foundation and was earlier director (content) MyGov

Vicky Kaushal and Katrina Kaif to celebrate one year of togetherness with a special plan: Read more

Ukrainian flags are on display all over Maine. Why?

The Industrial Future Is Taking Shape. VCs Are Missing Out

Ukrainian flags are on display all over Maine. Why?