Eight years of the Modi government, but no ‘achhe din’ 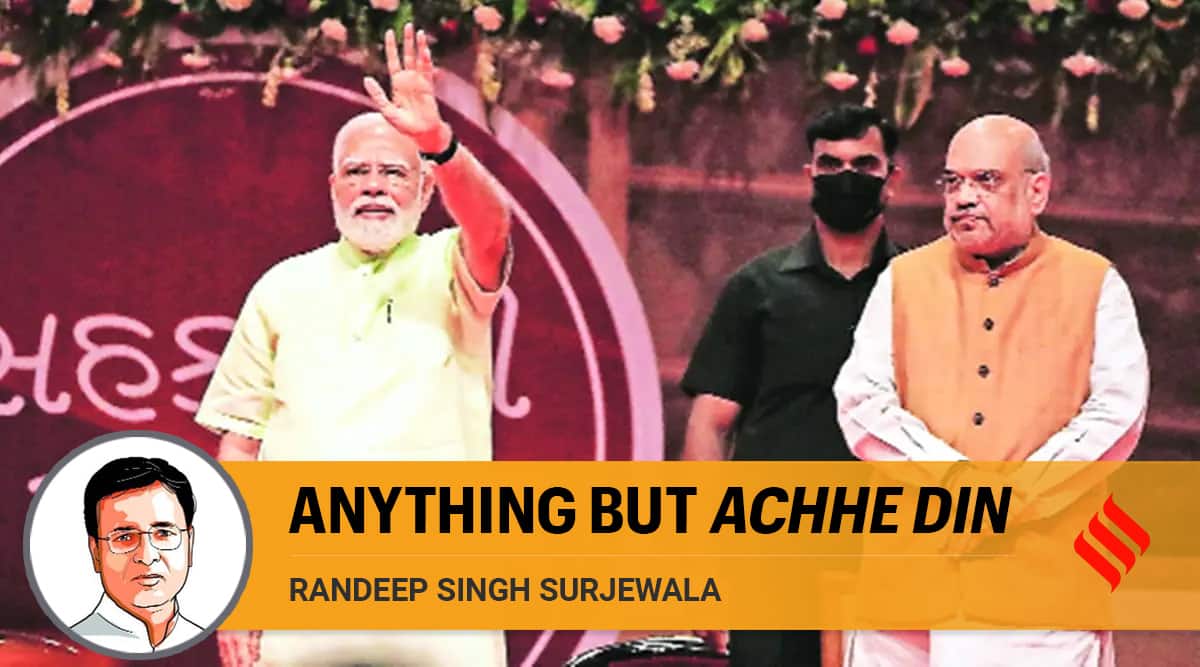 Eight years is a long time in which to measure a government’s performance.

The impact of policies and tent pole reforms start to become apparent, and the electorate can make an honest assessment of the leaders they elected. In countries such as the US, Canada and Brazil, eight years marks two presidential terms and the maximum term limit for an elected head of government/state. For Narendra Modi and his strawman cabinet, this is a significant milestone for three reasons.

First, no one is under any illusions about the Modi government now. In 2014, the then Gujarat chief minister Modi campaigned on promises of reform, growth, job creation, controlling inflation and equitable distribution of wealth, summarised in the slogan “achhe din”. In the last eight years, people have painfully suffered the exact opposite. Run-away inflation has singed the lives of common people. Wholesale inflation is at a 30-year high and food inflation has made the life of the middle class and poor unbearable. The unemployment rate is officially touching 8 per cent, and could be much higher. Instead of creating the promised 2 crore new jobs every year, over 12 crore jobs have been lost. This government has turned the demographic dividend into a demographic disaster. Boisterous sloganeering and advertisement-driven rhetoric are not a substitute for sound economic vision.

One must recognize that the falling rupee, flight of capital, plummeting GDP and a sharp drop in manufacturing activities are the result of a series of economic policy failures. This is called policy paralysis. It started with the body-blow of demonetisation, which failed in every single one of its stated objectives — curbing black money in circulation, combatting terrorism, reduction of forged currency and increasing taxation. The deeply flawed GST and 1,100 amendments since 2017 have made the taxation structure cumbersome for medium and small businesses. The bank frauds of Rs 5,35,000 crore over the last eight years and gross NPAs of 21 lakh crore have further eroded the credibility of the banking system. To top it, the surge in the Union’s debt from Rs 55 lakh crore in 2014 to 135 lakh crore now reflects a debt trap.

The vulnerable sections have faced the brunt of this policy paralysis. Fourteen crore people have been pushed below the poverty line in the last eight years. So much so that the subsidised ration guaranteed under the Food Security Act enacted by the Congress is the only source of sustenance for millions. About 62 core farmers and farm labourers have also fallen prey to this malady with the BJP government’s clandestine attempts at diluting the UPA’s 2013 Land Acquisition Act and failure to double farmers’ income.

The last eight years have witnessed attacks on India’s sovereignty and territorial integrity with the Modi government largely remaining a mute bystander. The devastating terror attacks at Uri, Pathankot and Pulwama and calling the dreaded ISI to Pathankot for an investigation are still fresh in every Indian’s memory. China has brazenly occupied our territory in Depsang Plains, Gogra Hot Springs, Pangong Tso Lake and other places for the last two years. From a PM who rode to power on the promise of showing “lal ankh” to China, the inaction is startling. Meanwhile, China has converted the entire LAC into a militarized zone.

Second, the Modi government has realized that it cannot stay in power if democratic institutions remain vigilant. So, it began the task of subordinating crucial institutions to its purposes. The timing and targets of actions by the CBI, ED and Income Tax Departments are so painfully obvious that states had to take the drastic step of withdrawing permissions to investigate. On the other hand, when someone defects to the BJP the charges mysteriously disappear.

Judges who acted in ways that incur the displeasure of the government are transferred swiftly to remote parts of the country. From a Supreme Court that had maintained a studied distance from the government, judges began to shower praises on the PM. One called him a model for the youth and another was nominated to the Rajya Sabha.

Third, it is now clear that the Modi government does not have the best interests of the public at heart. Modi declared the end of prematurely covid-19, boasting about exporting vaccines, when the second wave hit. It was devastating. Hospitals and doctors were overwhelmed, people died senselessly waiting for oxygen and hospital beds.

So, whose interests does the Modi government serve?

The BJP has become staggeringly rich. It declared assets worth Rs 4,847 crore in 2019-20. And apparently, this wasn’t enough. An RTI response revealed that the Modi government spent close to Rs 5,000 crore of public money in just four years (2014-2018) on publicity and promotion, more than double what the UPA spent in 10 years. Then there are the numerous attempts at curtailing the right to privacy and expanding state surveillance.

Consider the ultra-rich, the 142 richest Indians who saw their net worth soar by 30 lakh crore during the Covid years. All the while the average person saw petrol and diesel prices rise to over Rs 100 per litre. Cooking gas, oils and pulses all rose to exorbitant rates squeezing the already beleaguered middle class.

After eight years, those that claim their support for this government is based on good governance are engaged in a remarkable act of self-deception. It is propped up on three pillars — incessant propaganda, a distorted brand of nationalism to keep the population divided and the rampant misuse of investigative agencies.

Their greatest fear is that history will remember their sins. Thus, no matter how many layers of propaganda, rewritten history and false news they deploy to distract us we must never cease to hold a mirror to them. To paraphrase Thomas Jefferson, eternal vigilance is the price we pay for our democracy. The truly patriotic can do nothing less.