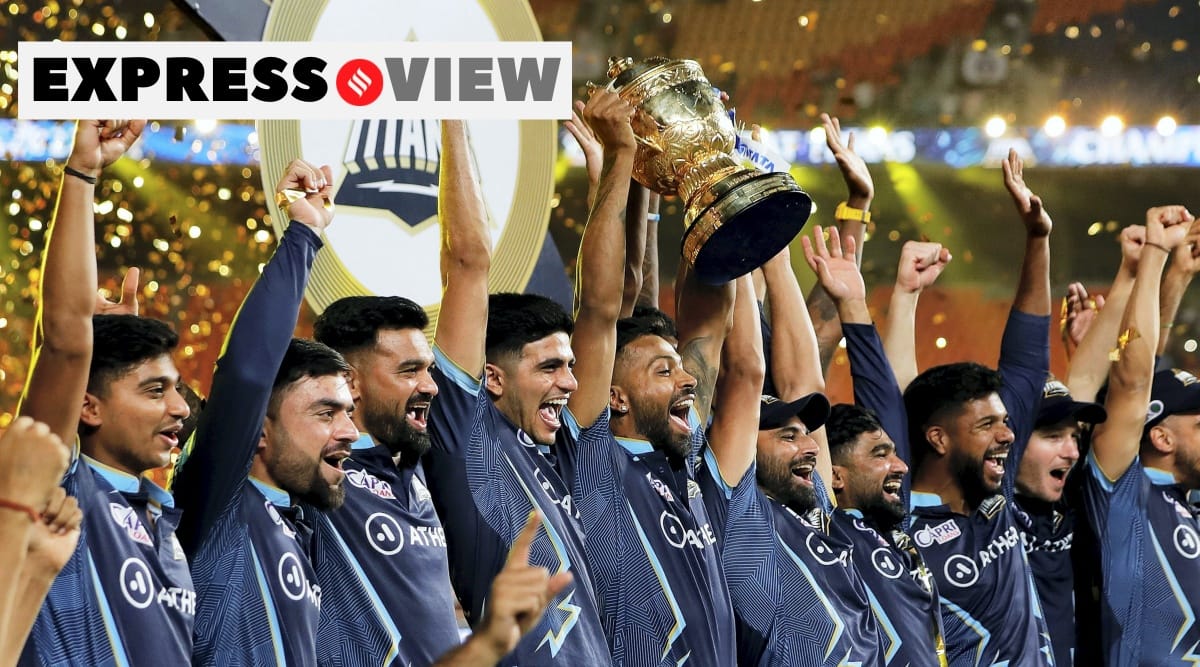 What lingers most from this edition of the Indian Premier League is the mood. After watching two years of cricket inside closed doors or in semi-shut stadiums or in the Middle East, due to the pandemic, the fans were back in the stands. Every match, at every venue, even in the relatively non-descript stadium in Pune, ran at full capacity. Buoyed by the backing of fans, the intensity of the games was several notches higher. Teams were confined to their respective bio-bubbles, a few players and coaches tested Covid positive, but the virus failed to displace cricket from the headlines.

The one-lakh plus crowd at the stadium at Ahmedabad undoubtedly gave Gujarat Titans an extra surge of energy during their win over Rajasthan Royals in the final. The support daunted the Royals, though Titans were the deserved winners — the most consistent and confident team in this edition. Teams tend to struggle in the first season. And this team was led by an untested captain, Hardik Pandya. How he proved his critics wrong — his brand of captaincy was no-frills, aggressive and shrewd, he revived his batting and rediscovered his bowling.

None of his players, except Rashid Khan, were T20 box-office. But Gujarat Titans’ auction signings were smart. They acquired Shubman Gill, one of the most talented young Indian batsmen; they bought David Miller, though his stocks had plummeted, and he emerged as their most influential batsman. They were shrewd enough to sign up the under-rated T20 pacers Lockie Ferguson and Mohammed Shami, Throw the unproven head coach Ashish Nehra into the mix — the pre-tournament controversy surrounding the team owners’ association with betting outlets — and here was a fairy-tale that would be re-told for years to come.

From the perspective of the upcoming T20 World Cup later this year, there was no bigger positive for Team India than the resurgence of Pandya. He brings to the team both balance and the X factor. There were other positives too for Indian cricket. A crew of young fast bowlers has emerged — from the tearaway Umran Malik to slippery left-arm Mohsin Khan, and feisty Kuldeep Sen to crafty Arshdeep Singh. Left-arm wrist spinner Kuldeep Yadav rekindled his mojo; leggie Yuzvendra Chahal was again weaving his magic. Veteran wicket-keeper Dinesh Karthik made a comeback, and could be the finisher India have been searching for. Sanju Samson was imperious as captain and with the bat. But IPL Episode 15 clearly belonged to Gujarat Titans, Pandya and the crowd that filled the stands, transforming the atmosphere into an electric, life-affirming occasion. Normalcy was restored on Planet Cricket.

Share
Facebook
Twitter
Pinterest
WhatsApp
Previous article
INTERVIEW: ‘Deliver the care our ocean needs – together’, urge co-hosts of UN conference |
Next article
Know in which mood which tea should be sipped on International Tea Day

Royals want Prince Harry, Meghan Markle ‘no where near their Christmas’

Prince Harry, Meghan Markle ‘messed up’ with move to the US

SPACs Slap Some Lipstick on Their Penny-Stock Pigs

Research shows deep class and wealth divisions between faculty and broader society. Can colleges change that?

SPACs Slap Some Lipstick on Their Penny-Stock Pigs