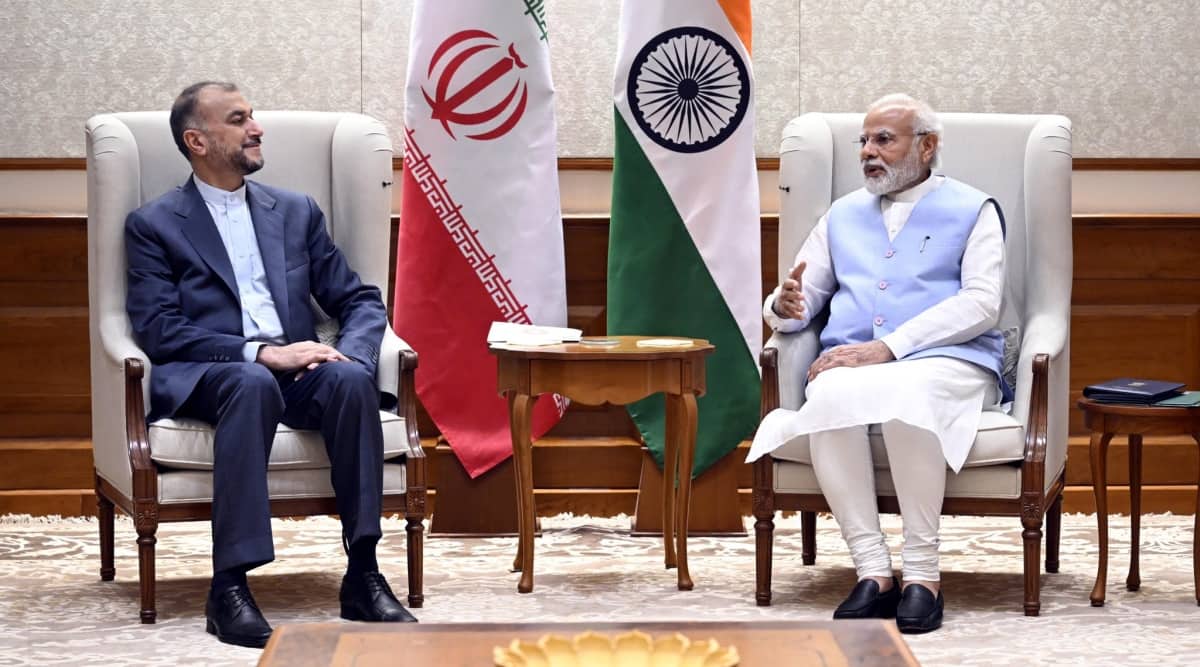 Amid the raging controversy regarding over a dozen Islamic nations condemning the comments made by former BJP spokespersons Nupur Sharma and Naveen Kumar Jindal, for which they have been suspended and by the party, respectively, Iran’s Foreign Minister Hossein Amir-Abdollahian held talks with External Affairs Minister S Jaishankar in Delhi on his first official visit on Wednesday.

The Iranian minister also called on Prime Minister Narendra Modi on Wednesday. Welcoming him Modi “warmly recalled the long-standing civilizational and cultural links between India and Iran” and discussed ongoing bilateral cooperation initiatives. Modi also “stressed that both countries should work to accelerate exchanges” in the post-Covid era.

“Prime Minister requested the Iran Foreign Minister to also transmit his greetings” to Iran’s President Ebrahim Raisi, and “looked forward to meeting the President of Iran at an early date,” a statement from the PMO said.

Earlier, Jaishankar and Amir-Abdollahian discussed multiple issues including the ongoing war in Ukrainethe situation in Afghanistan and the Joint Comprehensive Plan of Action (JCPOA) signed between Iran and the United States, France, Germany, China, Russia and the United Kingdom in July 2015, called the Iran nuclear deal, colloquially.

Jaishankar said he held wide-ranging discussions with Amir-Abdollahian. Tweeting about the meeting he said, “Wide ranging discussion with FM @Amirabdolahian of Iran. Reviewed our bilateral cooperation, including in trade, connectivity, health and people to people ties. Exchanged views on global and regional issues including JCPOA, Afghanistan and Ukraine.”

The External Affairs Ministry said in a statement that during the delegation level talks, the two ministers “discussed the entire gamut of bilateral relations including political, cultural and people to people ties.” Jaishankar appreciated the role of Iran in facilitating India’s medical assistance to Afghanistan, including supply of covid-19 vaccines to Afghan nationals residing in Iran, MEA said.

“Both sides acknowledged the significance of bilateral cooperation in the field of regional connectivity and reviewed the progress made at the Shahid Beheshti terminal, Chabahar port. The sides agreed that the Chabahar Port has provided much needed sea-access to landlocked Afghanistan and has also emerged as a commercial transit hub for the region, including for Central Asia. They reaffirmed their commitment to continue to cooperate on the development of Chabahar Port. Teams from both countries will be meeting soon to address operational aspects.”

Both the ministers also discussed “international and regional issues, including Afghanistan and the sides reaffirmed the importance of providing immediate humanitarian assistance to the people of Afghanistan and reiterated the need for a representative and inclusive political system in support of a peaceful, secure and stable Afghanistan “

MEA said that Amir-Abdollahian briefed Jaishankar “on the current situation pertaining to the JCPOA” also exchanged views on the Ukraine conflict and its repurcussions.

The statement mentioned that India and Iran share close historical and civilizational ties. “Our bilateral relations are marked by strong linkages across institutions, culture and people to people ties.”

He is on a three-day tour of India, and will visit Mumbai and Hyderabad over the next two days.

The meeting comes just days after Iran had summoned India’s ambassador to the nation, Gaddam Dharmendra on Sunday, to register its protest against the comments made by BJP leaders last week.

Iran was one among the first few nations to issue the demarche, after Qatar and Kuwait.

Since then, however, nearly a dozen more nations have either joined in summoning the Indian envoys, or have issued statements condemning the comments, some even asking for a public apology. Iran is a member of the Organization of Islamic Cooperation, a Jeddah-headquartered 57-member body, which had been very critical in its statement on the recent controversy. India had reacted sharply to OIC’s comments, calling its “denunciation” as “unwarranted and narrow-minded comments.”

Though it summoned the Indian diplomat, Iran had, however, refrained from issuing any statement on the controversy.

Delhi has maintained a high focus on its diplomatic relationship with Tehran, as it does not want it to fall under the influence of Beijing.

Iran has been one of the closest partners of India, especially in the Gulf region. India is also building the Chabahar Port, in partnership with Iran and Afghanistan earlier, located in the Sistan-Baluchestan province, which will give it access from the sea to Afghanistan and other Central Asian nations.

Jaishankar has been a regular visitor to Iran since taking over as the Foreign Minister in 2019. He first visited the Persian nation just months after taking over, in December 2019, to co-chair the 19th Joint Commission Meeting.

Less than a year later, in September 2020, Jaishankar and Defense Minister Rajnath Singh visited Iran independently, on their way to Moscow.

Jaishankar again visited Iran in July 2021, again on his way to Moscow, and handed over a personal message from Prime Minister Narendra Modi to Ebrahim Raisi, who had just been elected as the incoming president. He was back in Tehran just days later in August to attend Raisi’s swearing-in ceremony, to which India had been invited during the July visit.

All these meetings and discussions, however, had taken place before the Taliban took control of Kabul in August last year, changing the security scenario of the region.

Afghanistan continues to be one of the main topics of discussions between the two nations. Last week a team of Indian officials had visited Kabul for the first time since August and had discussed diplomatic relations, bilateral trade, and humanitarian assistance in a meeting with Taliban Foreign Minister Amir Khan Mottaqi.