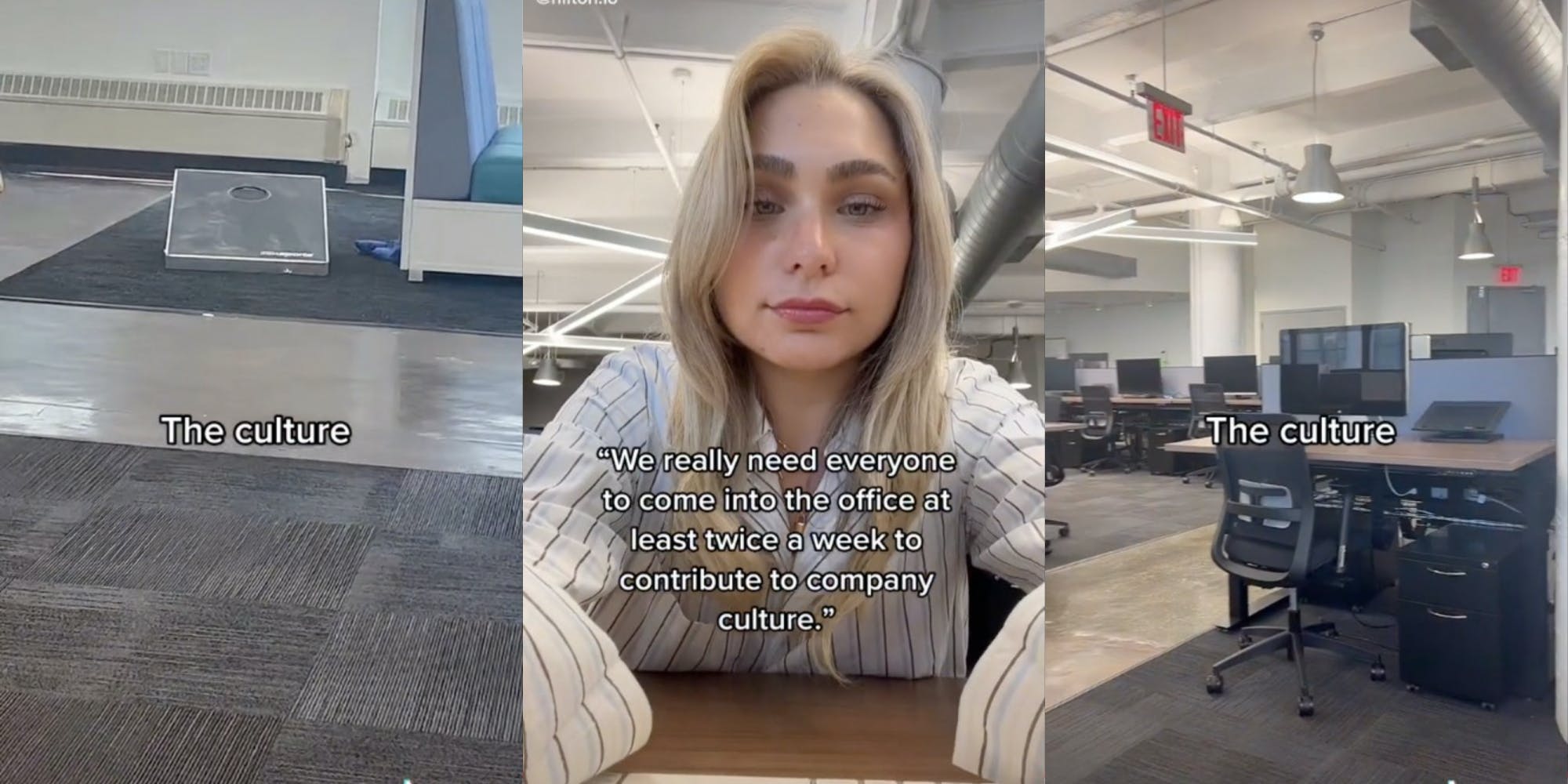 New York City-based TikToker Lo Hilton (@hilton.lo) posted a clip that’s been shared over 2,000 times and racked up over 36,000 likes on the popular social media platform. It also launched a discussion about the “uselessness” of businesses forcing employees to come into mostly empty workplaces to do their jobs post-pandemic.

During the COVID-19 pandemic, government-implemented stay-at-home and social distancing mandates forced many companies to adjust their operations to accommodate work-from-home models. And according to several studies, these transitions ultimately ended up positively affecting businesses’ bottom lines. Remote employees ended up being more productive and were happier with their jobs, which culminated in lower turnover rates and higher profits/efficacy per worker. On top of that, businesses ended up saving a ton of money in overhead costs.

However, after COVID-19 restrictions began to scale back, some companies began asking their workforce to return back to the office. A fact Lo criticized with a ten-second, visually-based TikTok clip that highlights what returning to the office looks like for many workers.

Unlimited N’espresso and a free view of two bridges!!!!

In the video, she shows herself seated in what appears to be a completely desolate office space. She’s the only one seated at her desk, and she proceeds to show what the rest of the area looks like. A lone cornhole board rests on the ground near an empty seating area. There are rows of monitors and office chairs with nobody sitting on them lined up throughout the office, and the video ends with Lo recording through a window in the office showing a bright, sunny day outdoors.

She writes in a quoted text overlay on the clip: “We really need everyone to come into the office at least twice a week to contribute to company culture.”

It appears that Lo is one of the few people to take that message to heart, as the company culture, according to what she uploaded on TikTok, is an empty, leased office space that no one is using.

There are several successful businesses that have an entirely remote-based employee model, like WordPress. While the business itself writes that a 100% work-from-home model isn’t right for every single company, it has managed to figure out a way to ensure its operations are profitable. Most recent estimates have placed WP at a whopping $3 Billion valuation, not bad for a content management system that has a huge bulk of free users.

CNBC reported in March of 2022 that “50% of companies want workers back in office 5 days a week,” however, there are many analysts who’ve speculated that this could ultimately be a bad idea. That’s because 57% of workers are looking for fully-remote jobs, and there are an even larger number of people who would like a hybrid option as well. Then there are practical benefits to having remote positions businesses are missing out on by demanding their workers return to the office. Having a larger staff in-office at all times means that there needs to be more space and resources to accommodate them.

But the real issue just seems to boil down to what the most attractive jobs are to those looking for gainful employment: and flexible positions are where it’s at. CNBC also reported that “Remote and hybrid jobs are attracting 7 times more applicants than in-person roles,” which means that greater applicant pools, statistically speaking, will result in greater opportunities to attract top-level talent.

TikTokers who saw Lo’s post expressed their ennui with being forced to go back into the office in the comments section. Many others highlighted the absurdity of commuting to work just to perform the same tasks on the work-issued laptop they use while they’re at home…just in a different environment. Then there were those who thought that working in a desolate office space wasn’t really the best thing for their mental health.

“I literally sat under my desk and cried abt work yesterday bc I was the only one working on my entire floor,” a top comment read.

“Being told we have to come just for everyone to sit with office doors closed on team meetings all day like byeeee,” one user shared.

“Translation: we desparately need to justify why we’re locked into an overpriced 5yr office lease,” another user wrote.

“I can’t believe I drive to an office to work on a laptop that I carry with me,” a viewer shared.

“My company just made me fly out for the week…to take zoom calls from the office. depressing,” a user lamented.

“THIS! I’m the youngest at the office and required to come in 3 days a week, always empty,” a commenter wrote. “Wish more people world come in or let me work remote.”

The Daily Dot has reached out to Lo via TikTok comment for further information.

We crawl the web so you don’t have to.

Sign up for the Daily Dot newsletter to get the best and worst of the internet in your inbox every day.

Jack Alban is a freelance journalist for the Daily Dot covering trending human interest/social media stories and the reactions real people have to them. He always seeks to incorporate evidence-based studies, current events, and facts pertinent to these stories to create your not-so-average viral post.

Three Uber Drivers Cancel on Rider Because of Their Service Dog

California to Florida, the rich are gaming climate change

The Tears of Cristiano Ronaldo

California to Florida, the rich are gaming climate change

The Tears of Cristiano Ronaldo